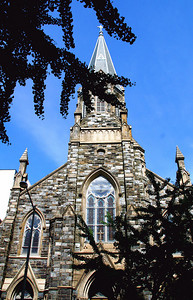 The Sacred Music Colloquium, sponsored by the Church Music Association of America, was an unprecedented success this year, with 140 people attending from around the country and the world. They studied Gregorian chant and polyphony for use in liturgy, and sang the very music from classroom setting at Masses held at the Crypt Church of the National Shrine of the Immaculate Conception, at The Catholic University of America, Washington, D.C.

Attendance was far higher than expected, so much so that registration for the colloquium had to be closed fully two months before the event took place from June 22 through 27, 2007.

This was the 17th annual colloquium focused on the restoration of the sacred within Catholic liturgy. Participants, including organists, choir directors, singers of all levels, as well at 17 priests, were in universal agreement that this indeed was “six days of musical Heaven.”

Sessions began on Tuesday afternoon with introductory talks by CMAA president William Mahrt. Vice president Horst Buchholz presented an introduction to conducting, even as auditions were being held for chamber choir scheduled to sing three motets during the week. The full group gathered for more introductions and dinner, and met after for the first rehearsal, which largely focused on the first liturgy to be held the following mid-morning.

Throughout the week, chant master Scott Turkington led the men’s schola through the propers of the week’s Masses, while Mahrt conducted the women’s schola. Amy Zuberbueller led the sessions introducing the chant to new singers, covering the reading of Gregorian notation and working on pitch and rhythm. Lectures throughout the week were given by Mahrt, Buchholz, Rev. Robert A. Skeris, and Kurt Poterack. The rehearsal accompanist throughout the week was organist David J. Hughes.

The Masses explored a wide range of options within the Roman Rite. The first Mass was in English, with English propers adapted from the Graduale and Psalm tone by Rev. Samuel Weber, OSB. The choirs sang Kyrie XVIII, a Pater noster setting by Mahrt, and the Sanctus and Agnus Dei set to chant in English from the Sacramentary. The principle celebrant was Fr. Skeris.

The next day’s Mass was a requiem for the deceased members of the CMAA. The propers were from the Graduale, the ordinary was Mass XVIII, the sequence for the Mass was sung in alternatim, and two motets were sung: Ave Verum by Edward Elgar and “I Am the Resurrection and the Life” by William Croft. The Mass, celebrated by Rev. Jeffrey Keyes, was in Latin.

The colloquium experienced a rare opportunity to compare the classical Roman rite, celebrated on Saturday at St. Mary’s Catholic Church, with the modern rite for the same feast, celebrated at the Crypt Church the following day by Rev. Lawrence Donnelly.

On Friday evening, the event was called “coffeehouse polyphony” and the choir read through polyphonic music that predated the Council of Trent. This was followed by a series of performances, sometimes serious and sometimes silly, by attendees. It was the first colloquium to feature such an event.

Mahrt wrapped up the week’s events with a call for attendees to take home what they have learned and become leaders in the revival of the sacred in their own parish environments. Recordings of some of the music can be heard at MusicaSacra.com. Some images from the colloquium also appear on this site.

The colloquium next year will be held during the same week in June. Because the colloquium will need to dramatically expand to keep up with demand, program director Arlene Oost-Zinner said that details concerning location will be announced at a later date.