The Church Music Association of America

was formed in 1964 as the Second Vatican Council drew to a close, as the coming together of the American Society of St. Cecilia (founded 1874) and the St. Gregory Society (founded 1913), and it inherits the rich history of these organizations. Their amalgamation in 1964 began a new chapter in the history of American Catholic music.

The CMAA was formed as the American affiliate of the Consociatio Internationalis Musicae Sacrae (CIMS), established by Pope Paul VI on November 22, 1963, the Feast of Saint Cecilia, patroness of music. CIMS developed out of a series of conferences on sacred music held in Europe starting in the Holy Year 1950, sponsored by the Pontifical Institute of Sacred Music. The chirograph Nobile subsidium Liturgiae established the Consociatio as an “international institute which would be able to make known [to the Holy See] the needs of sacred music, and which would be able to assist in putting the decisions of the supreme ecclesiastical authority relating to sacred music into practice.” Pope Paul VI appointed officers for the CIMS on March 7, 1964.

As the Second Vatican Council drew to a close in 1964, a group of American church musicians met at Boys’ Town, Nebraska, to form the CMAA as the American affiliate of the Consociatio. They were members of the Society of Saint Gregory of America (founded 1913) and the American Society of Saint Cecilia (founded 1874). A photo taken at the meeting shows 63 participants. Most prominent at the meeting were Monsignor Schmitt, Reverend Richard J. Schuler, Archabbot Rembert Weakland, Father John Selner, and Father Robert A. Skeris. A provisional constitution was drafted and officers were chosen: Weakland was named president, Father Cletus Madsen vice president, Father Schuler secretary, and Frank Szynskie treasurer. At this meeting a resolution put forward by Fr. Skeris was adopted in which the group pledged itself to maintain the highest artistic standards in church music and to preserve the treasury of sacred music, especially Gregorian chant.

In 1966, the Consociatio sponsored a convention in Milwaukee, Wisconsin in conjunction with the Fifth International Church Music Congress. At its conclusion, delegates held the first general meeting of the CMAA. An election of new officers was held at this meeting, and Weakland was replaced as president by Theodore Marier. 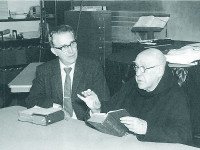 the second president of the Association, was the long-time director of music at St. Paul Church at Harvard Square, Cambridge, Massachusetts.  He founded and directed the Boston Archdiocesan  Choir School, the only Catholic choir school for boys in the United States.  He was a collaborator of the St. Pius X School of Liturgical Music at Manhattanville College and contributor to the Pius X Hymnal. He later edited the hymnals Cantus Populi and Hymns, Psalms, and Spiritual Canticles.

In 1968, Marier was reelected, along with composer Noel Goemanne as vice-president, and Fr. Skeris as secretary. In 1970, Roger Wagner became president. In 1973, Gerhard Track was named president, Fr. Skeris vice president, and Monsignor Schuler secretary. At the meeting of 1973, Solemn Mass was celebrated in the Church of St. Agnes, Saint Paul, Minnesota, by Msgr. Johannes Overath with a congregation of one thousand, including Archbishop Leo Binz of Saint Paul and Bishop Alphonse Schladweiler of New Ulm, Minnesota.

To recognize the hundredth anniversary of the 1874 founding of CMAA’s predecessor organization, the Society of St. Cecilia, the organization held a Mass at the Church of St. Agnes on December 27, 1973. A congratulatory telegram from Pope Paul VI was read at the conclusion of the Mass.

The CMAA began sponsoring an annual Sacred Music Colloquium in 1991, in conjunction with the Ward Center of the Rome School of Music at Catholic University of America. The first Colloquium was held at Christendom College.

In order to promote works of modern sacred music as well as chant and polyphony, the CMAA sponsors new music reading sessions at its colloquia, presenting new works of contemporary composers, including Kevin Allen and Richard Rice.

In the 1990s, CMAA’s meetings and colloquia on sacred music were held at Christendom College in Front Royal, Virginia, with music professor Kurt Poterack, then editor of Sacred Music, serving as director. At the initial gatherings, Colloquium choirs traveled to the National Shrine of the Immaculate Conception to sing at a liturgy.

Beginning in 2003, the location for the Sacred Music Colloquium was Catholic University of America, and the four-day program included sung Mass daily at the neighboring National Shrine.

In 2008 the program expanded to 250 participants and to six days, relocating to Chicago’s Loyola University. Daily Masses, in English or Latin, including the traditional and modern forms of the Roman Rite, were sung at Loyola’s Madonna del Strada Chapel, as well as Solemn Vespers, and Holy Hours with Exposition and Benediction.

CMAA offered a contribution to the liturgical work of the U.S. bishops in 2006, when president William Mahrt participated in the October 9, 2006, public comment session of the United States Conference of Catholic Bishops Liturgy Committee, Subcommittee on Music, in preparation for a revision of the 1983 document Music in Catholic Worship, which eventually produced the document Sing to the Lord.

In 2010 and 2011 the seven-day Summer Colloquium was held at Pittsburgh’s Duquesne University. Programs included expanded lecture series, sessions for organists, and a full orchestral Mass. The 2012 and 2013 colloquia were held in Salt Lake City, Utah, at the Cathedral of the Madeleine and the neighboring Madeleine Choir School. During the 2013 event, Archbishop Alexander King Sample presented a lecture on “The Spirit of the Liturgy”, according to the thought of Pope Benedict XVI.

The 2014 Sacred Music Colloquium was held at St John the Evangelist Church in Indianapolis, Indiana, with keynote addresses by Fr. Christopher Smith (theology of the liturgy), Prof. Denis McNamara (sacred architecture), and Prof. William Mahrt (The Ordinary of the Mass and the Beauty of the Liturgy). Colloquium attendees were guests of Christ Church Episcopal in downtown Indianapolis for a celebration of Evensong and a recital by organist Simon Thomas Jacobs. The 2015 Colloquium was held at Duquesne University in Pittsburgh from June 29 to July 4, 2015, with liturgies at the Duquesne University Chapel of the Holy Spirit and the Cathedral of St. Paul in Pittsburgh. The 2016 Colloquium was held from June 20-25, 2016 in St. Louis, Missouri, with liturgies held at the Cathedral Basilica of St. Louis, the Shrine of St. Joseph, and the Pro-Cathedral of St. John the Evangelist and Apostle. The 2017 Colloquium was held from June 19-24, 2017 in Saint Paul, Minnesota, at the University of St. Thomas, and at the parishes of Saint Mark and of Saint Agnes, the latter noted as the home of long-time CMAA president Fr. Richard Schuler.

Recordings of music and lectures from the Sacred Music Colloquium since 2008 are on-line at recordings.musicasacra.com.