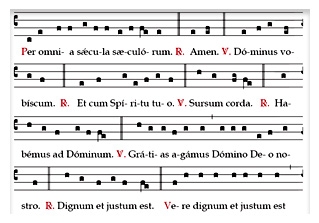 The sung Mass remains the normative form in the Roman Rite. Indeed, the Second Vatican Council said that singing the Mass texts ennobles the liturgy. But this is not the norm in most parishes. Many celebrants are ready to take the step, but they need training in the finer details and the confidence to begin.

To provide this training is the purpose of “Missa in Cantu: A Seminar in the Sung Mass for Celebrants,” as sponsored by the Church Music Association of America and St. John Cantius parish in Chicago, Illinois. The dates are October 17-19, 2007, and the cost is $165 including meals. The location is St. Cantius, 825 N. Carpenter St., Chicago, Illinois. Registration Deadline: September 17, 2007. You can register and pay online at MusicaSacra.com/celebrant.

The seminar includes tracks for the new and old forms of the Roman Rite. It is designed for celebrants who have never before attempted to sing the Mass, and also those who need to refine their abilities. This seminar broadens the full range of liturgical possibilities. Even for those who know no Latin, it is easier to learn through singing than merely speaking. And the seminar is open for those who are interested in observing the extraordinary rite, even if celebrating it isn’t yet viable.

The seminar covers: the basics of common tones; singing the collects, readings, prefaces, and other parts of the Mass; the musical rubrics for the Roman rite; the integration of the celebrant, schola, and people; the literature and the wide range of options, vocal production and style; and much more.

The seminar begins at noon on Wednesday and concludes with lunch on Friday. Sessions take place at the parish and daily Masses will be celebrated in this splendid Church that has achieved national prominence for its multiplicity of liturgical forms and its vast musical program.

Participants can also join the members of the Canons Regular of St. John Cantius and their parishioners for all of the hours of the Divine Office, the recitation of the Holy Rosary, Solemn Benediction, and the celebration of the Holy Sacrifice of the Mass in the Ordinary Form (in both English and in Latin, 1970 Missale Romanum), as well as in the Extraordinary Form (1962 Missale Romanum).

They will be joined by several parish choirs, including the Cantate Domino Choir (girl choir), the Holy Innocents’ Choir (children’s choir), Schola Cantorum of St. Gregory the Great (men’s schola) and the Sine Nomine Choir and Orchestra (adult mixed choir and orchestra).