What “other musical settings” is the Church referring to, and does it have any preference? If we read the Second Vatican Council’s constitution on the sacred liturgy, Sacrosanctum Concilium, we find (par. 116) that the Church says “especially polyphony” when it considers alternatives to Gregorian chant. How should we understand this phrase and its explicit preference? The most Catholic way would be to interpret it in the extraordinarily inclusive light of Catholic tradition. Accordingly, polyphony means “the Roman Catholic tradition of sacred polyphonic vocal music.”

As our beloved Pope Benedict’s recent remarks on music make quite clear, the tradition of Roman Catholic sacred music is not something immobilized and encased in amber. There is indeed room for organic musical development, which is obviously what the Pope means when he speaks of “worthy novelties” in sacred music. “Organic development” means growth that displays clear filiation, procession, elaboration — not high modernist avant-gardism, not self-conscious rebellion, not gadding about like a witless consumer after the latest cultural fashions. In order to avoid these overly-selfish forms of musical pursuit, it is necessary to immerse oneself in the music of musical predecessors who saw their own work as musical extensions and developments of sacred chant.

This can be done. And if one wishes to set — and sing! — the Church’s first preference for sung Propers, here is a spreadsheet of the Propers with links to polyphonic settings of them (click on the image): 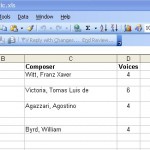 This file is a living document: it can be added to, sorted any way you wish, and includes links to freely-available scores on the internet. Theoretically, it could eventually amount to a massive catalog of instantly usable polyphony. So if you want to be faithful to the Church’s explicit preferences for music at Mass, here is your best tool. Our loud and hearty thanks to Aristotle Esguerra for compiling and maintaining this invaluable resource for the Church!