Fiftieth Anniversary of the CMAA 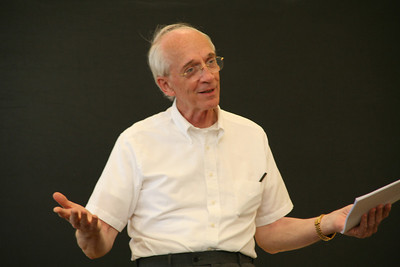 marks the 50th anniversary of the founding of the Church Music Association of America and its journal Sacred Music. This will be the focus of celebration at Colloquium XXIV  in Indianapolis, June 30–July 6, 2014.

It is not as if this were a new society, even then, far from it. It was an amalgamation of the Society of St. Cecilia (1874) and the Society of St. Gregory (1913). In view of the importance music played in the Constitution on the Sacred Liturgy from the Second Vatican Council, church musicians of the two societies saw the need to join forces to take advantage of the directions the council had indicated for the integration of the treasury of sacred music with substantive participation of the people in the sacred action: the great heritage of Gregorian chant and classical polyphony should enhance the participation of believers in the action of Christ in the Mass, and this should form a precedent for the composition of new sacred music. And so at a meeting in late September 1964, at Boys Town, Nebraska, members of these societies together established the CMAA as a continuation of their groups.

Soon after, new directions in Catholic Church music emerged that were not entirely in accord with the prescriptions of the council: the use of styles borrowed from popular music and so-called “folk music” contributed to a desacralization of the liturgy, and the traditional music was eclipsed, so that Gregorian chant and classical polyphony faded from view rather quickly, except in certain centers where the tradition was maintained. Some thought the association irrelevant or even moribund, but a few stalwarts stayed the course, maintaining principles of artistic excellence and sacredness in fostering both the traditional repertories and the composition of new liturgical music congruent with those repertories.

The journal Sacred Music was a continuation of the journals of the two societies, Caecilia and the Catholic Choirmaster (1915). Caecilia had been founded in 1874 and published continuously ever since, making Sacred Music the oldest continuing music publication in the United States. With the decline of the employment of the treasury of sacred music, the journal was the principal activity of the CMAA, particularly under its long-time editor Msgr. Richard Schuler (1975–1998),1 who insisted that the society and its journal must be maintained, however small, because sometime it would be needed again.

Msgr. Schuler’s vision was prophetic: the association is now needed. From the last decade of the twentieth century, there has been a growing realization that the liturgy is in need of greater beauty and sacredness; this led to a natural turn toward tradition once again for inspiration. The revitalization of the association centered upon the summer colloquia, first held at Christendom College in 1990 and moved to the Catholic University of America in 2003. From that time, the Colloquium grew to be the vital focal point of the best of our sacred music tradition and its renewal in both Latin and English practice. The Colloquium presents the best of the treasury of sacred music, in as ideal a form as possible; those in attendance go back to their parishes and make manifold application of the sense of the beauty and sacredness of the liturgy experienced at the Colloquium.

In addition, the CMAA sponsors workshops in Gregorian chant—particularly the Chant Intensive courses; publications—for example, the Parish Book of Chant; a website, which includes the Forum—a medium for free exchange of information and opinion among church musicians; and the Chant Cafe—a blog which hosts longer essays of information and opinion authored by a team of experts. Recently, the CMAA acquired the New Liturgical Movement—an existing and very popular blog concerning specifically liturgical information, everything from recondite liturgical texts, the liturgies of the various traditions, architecture, vestments, sacred art, and music.

Work in the parishes progresses. Many of our members are active, practicing church musicians, who see the need to improve the music in their own situations. They begin by discreetly adding an element of chant propers, in English or Latin, in simple or full settings; adding an element of the chant ordinary for the congregation; developing a repertory of motets and anthems to be sung by the choir; and cultivating excellent organ music: always with the goal of making the liturgy more beautiful and more sacred. Most begin with a typical parish Mass and work for gradual improvement. Others begin a completely sung Mass with proper and ordinary and a complement of polyphonic choir and organ music. The music of both ordinary and extraordinary forms of the liturgy (Tridentine and novus ordo) is in need of substantial improvement, and there is increasing activity among our members to these ends.

The work of the Church Music Association of America has just begun.

On its fiftieth anniversary, we dedicate ourselves to furthering the mandate of the Second Vatican Council of fostering the liturgy in both Latin and the vernacular and doing so in the context of sung liturgies employing artistically excellent sacred music. We invite old and new members alike to join in this glorious project of the improvement of divine worship among us, to come to Indianapolis to celebrate our anniversary and to share in the beauty and sacredness of the sung liturgy with us.