A Lively and Systematic Approach

The Ward Method was developed in the 1920’s by American music teacher Justine Bayard Ward (1879-1975), in cooperation with The Catholic University of America, with the purpose of providing a music curriculum suited to the needs of Catholic elementary schools across the nation. It was Mrs. Ward’s vision that all children, not just a gifted few, should be offered a solid musical education. Since that time, the method has been, through application, continually updated and improved. The Ward Method provides today’s music teachers a decades-tested and certain solution to offering children the kind of musical education upon which they can build for a lifetime.

The Ward Method focuses on singing as the foundation of musical instruction. Children learn to express themselves musically in much the same way that they do in the spoken word. The method makes no use of extraneous musical instruments, but relies instead on a child’s own experience with singing and body movement.

The structure of method itself comes from the knowledge that elementary aged children (especially in the first and second grades) do not learn in generalities, but tend to focus, instead, on specific parts of a whole before applying knowledge more broadly. The Ward method makes use of this fact in that it subdivides music into discrete elements which are taught individually before recombining them to make a whole:

The goal in teaching voice production is to guide children in finding their own melodic and well-tuned instruments: with the help of simple exercises, the child gains a sense of his own singing voice. The vocal compass is developed step by step, all the while paying attention to correct placement of the voice and beauty of sound.

The goal of ear training is twofold: it aids the child in the formation of notes and sharpens his ability to imagine the different notes of a scale. The Ward Method makes use of a system known as Solfege, wherein a note is thought of not in terms of an absolute pitch, but in terms of its position relative to other notes in a given scale. The child’s attention is steered toward clean intonation. Ear training, in addition, assists a child in developing his musical memory.

Through this division of the notes of the pentachord (do re mi fa sol) and tetrachord (do ti la sol), children develop a sense of the tension between tonics and dominants early on. Furthermore, it makes way for an easier understanding of the relationship between plagal and authentic forms of a scale at a later time.

As a help in the development of a musical imagination and memory, the Ward Method introduces specific hand motions, or melodic gestures, whereby each note is attached to a particular position on the body.

3. Rhythm The method imparts a sense of rhythm to the children through the use of a prescribed set of dance-like movements. Children stand up at various intervals during class time and mimic movements made by their teacher, whose body is positioned in mirror image to those of the children.This is all done in time to music or song. The idea is that the children learn to feel the music in their whole bodies, from the lift of their feet and the bend in their knees up through the sweeping movement of their arms. Applying movement to what is audible informs a precise understanding of different note values and fosters an intuitive sense of the musical line.

The Ward method assigns a number to each of the syllables of found in the Solfege system. This approach makes sense, because most children can read the numbers one through seven by the age of six. With the addition of dots either above or below these numbers, a range of three octaves can be easily rendered.

Diagram 3: number notation applied to the syllables of Solfege; the caret indicates the position of the half step

The Ward Method teaches children to read and write down metrical patterns as well. Metrical notation takes a stroke/dot format, with the stroke indicating a sung note, and the dot indicating that the note before appearing before it is to be held that additional length of time.Children can combine metrical patterns arbitrarily. Longer metrical sequences consisting of more than one line are the end result. These, in turn, can serve as a basis for a melody.Here is an example of a combination of patterns in 2/4: 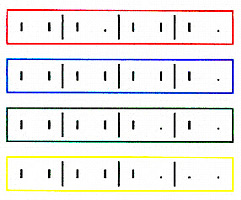 These metrical patterns can also be expressed through metrical language. Each individual value unit is assigned a sound syllable: half note: long; quarter note: la; eighth note: li-ra. Children learn hand gestures, or metrical gestures which correspond to these sound syllables. They learn to sing the sound syllables “la” and “long” while counting the same into the palms of their hands.The Ward Method’s number and stroke/dot notation systems are useful in teaching beginners because they are one dimensional. Number notation addresses only one aspect, pitch, and the rhythmic stroke/dot notation, likewise, addresses only duration. This makes it easy for children to concentrate on each of the aspects individually. The two forms of notation (number and stroke/dot) can then be easily combined, resulting in a number notation with an added element of dimensionality:

Diagram 5: a four-line melody 5.Improvisation An important objective of the Ward Method is for each child to develop musical independence. Students should not only be able to reproduce music, but should be able to articulate their own musical ideas. They learn to improvise and generate small compositions through the use of familiar melodic and rhythmic material.6. Melodies and SongsThe songs and melodies contained in the Ward Method are carefully selected to correspond to the children’s level of proficiency. The above-mentioned elements necessary to the making of music are brought together in a meaningful synthesis. The Ward Method LessonThese different elements are introduced in rapid succession within a single Ward lesson. This prevents a loss of interest or fatigue that can come about by drilling one thing too long. This approach also lends a balanced sense of importance to each aspect of music learning, with no one element being prized over another. The focus on specific elements will shift every two or three minutes within a twenty minute lesson. The benefit is that the lesson remains playful, which in turn has a positive effect on a child’s motivation.From lesson to lesson, the difficulty of the material, i.e., the range of melodic and rhythmic tools available for the children’s use, is progressively increased.The aim of the lessons is for the children to exhibit musical independence. They learn a melody or song under the lively guidance of their teacher, but without the teacher’s having sung the material to them over the course of the lesson. The teacher acts as a facilitator in their ever growing ability to solve musical problems on their own.Music for everyoneThe Ward Method should be taught to students in their first few years of school – not necessarily by specially trained music teachers, but by classroom teachers as well, making music a normative part of every child’s educational experience.Classes in teaching the Ward Method are conducted every summer at The Catholic University of America, and at various Ward Centers throughout the world. These courses are intended for all who wish to teach the method, not just those with a formal musical background. The only prerequisites are the love of music, and most of all, singing.____________________
–Translated by Arlene Oost-Zinner

The 10 boys and 14 girls on the video are part of a first grade glass at the Cathedral Choir School in Cologne, Germany. At the time the video was made, the children had been in the school for nine months and had received a total of ninety, twenty-minute Ward lessons. The text used for the lessons is the 1976 edition, That All May Sing. The German version is an authorized translation of the original American edition. All rights to the video belong to Gisbert Brandt, Ward-Zentrum Köln e.V., Longericher Straße 370; 50739 Köln; Tel.: 0221-599 59 08; Fax: 0221-957 30 71.